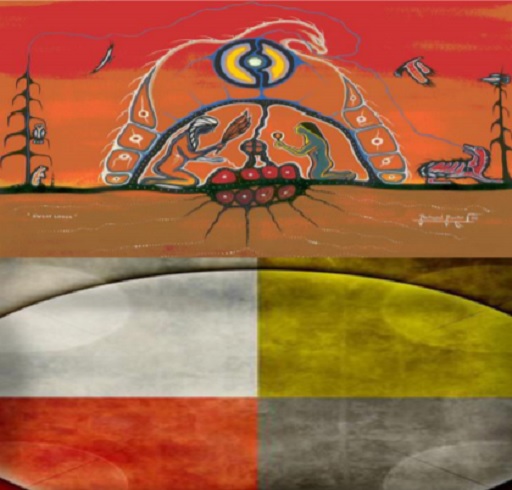 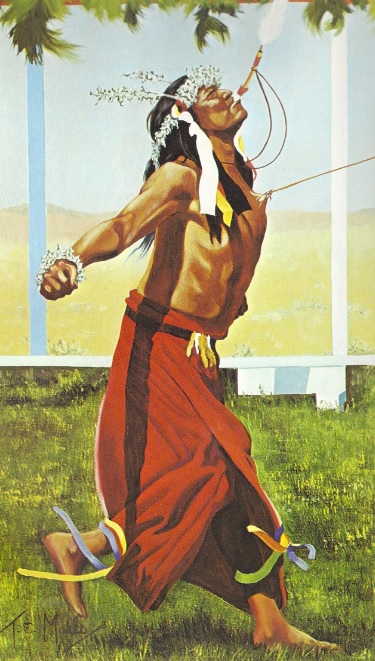 Many Indian Nations are forbidden to share their specific religious beliefs, even with other Indians, and with members of their own tribe who are less than full-bloods.  The Lakota had no such restrictions.  At the time of The Longest Walk, the Lakota were eager to share their “Sweat Lodge”, in order to create unity among Indians and their extended families, to heal and to stabilize individuals & family relationships.

A Lakota spiritual leader had a vision that the colors, Black, Red, Yellow and White, Indian sacred colors, stood for the four races.  This became the belief of choice for Pan-Indianism.  The Lakota offered their Sweat Lodge ceremony and the Sweat Lodge has become the most widely spread ceremony in Pan-Indianism.  It was in the sacred Sweat Lodge that Lakota first learned to pray for all their relations.

Note: A sweat lodge is a low profile hut, typically dome-shaped or oblong, and made with natural materials.  The structure is the lodge, and the ceremony performed within the structure may be called a purification ceremony or simply a sweat.

After the Longest Walk, the Lakota Sun Dance was extended to California at D-Q University, one of the first of tribal colleges.  Many of the Indians who had been on the Longest Walk, participated in that Sun Dance. This was a continuation of the Sun Dance being extended to Pan-Indianism.  Sundances continued to grow from there across America.

Note: The Sun Dance is a ceremony practiced by some Indigenous people of United States of America & Canada, primarily those of the Plains cultures. It usually involves the community gathering together to pray for healing. Individuals make personal sacrifices on behalf of the community. 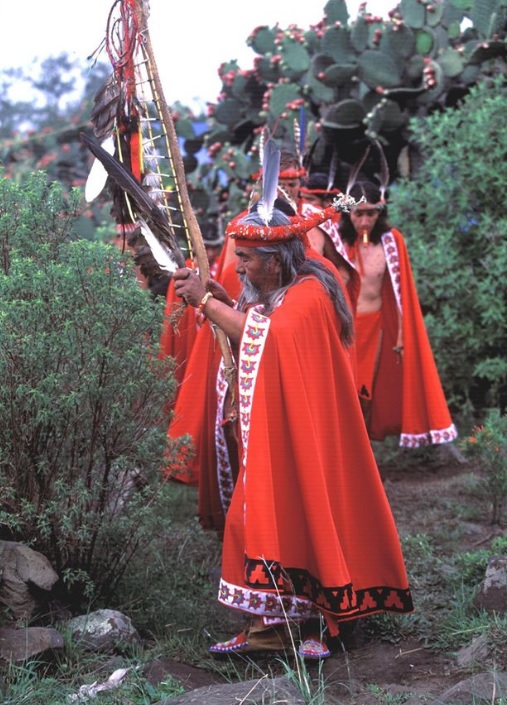 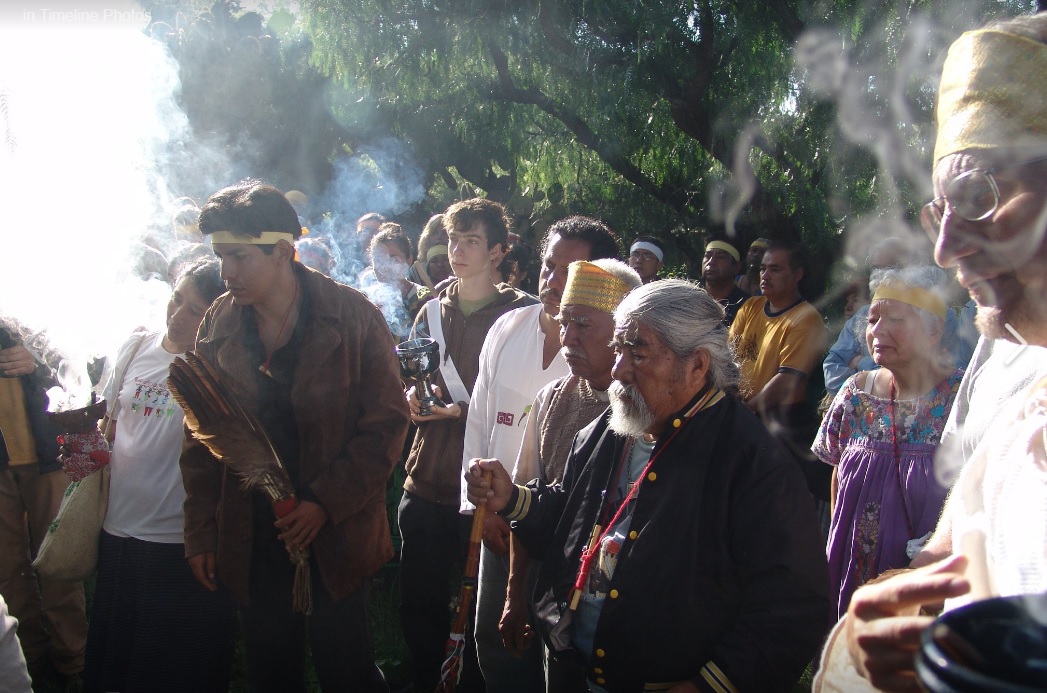 In 1981, at an important Sundance ceremony held by Leonard Crow Dow (Sicangu Lakota), Tlakaelel Jiménez (Toltec) requested to take the Sundance down to his people in Mexico.  Leonard’s blessings were given and Tlakaelel brought the Sundance to Mexico.

After the 1981 Sundance ceremony, held by Leonard Crow Dog, inter-tribal Sundances gained momentum and have even reached the continent of Europe.  Today, over 100 Sundances occur every summer.

ELDER… This week I looked on the Internet and went to library to learn about ceremonies from all over the word.  What I found out was fascinating.  It is incredible how people celebrate their relationship with Creator in so many different ways.  For example, one ceremony that everyone in this circle is aware of is the sweat lodge.  My Elders taught me that when we enter the lodge, it is like returning to the mother’s womb because we sit upon the Lifegiver of all Creation, Mother Earth.  We also are surrounded by water, like we were in the womb and this is a gift from Good Grandmothers & Good Grandfathers (the sacred stone people) that come into the lodge to heat the water spirit that embraces us.

In the lodge, we leave the physical realm and for a time, and are welcomed into the spiritual world; when we return into the physical realm; we are purified from the steam, sweat and the medicines and as a result, are reborn.  It is a beautiful spiritual experience.  The lodge or similar purification ceremonies, like cold-water baths, use of natural elements & medicines for purification, and were used by first people’s cultures in many territories throughout Turtle Island.

What I discovered this week was how other cultures use similar purification ceremonies.  Now I ask for your patience, memorization is not one of my gifts so I jotted down a few key words so I don’t lose my place.  The Elder held up a journal and looked around to gained agreement that it was OK for him to have it nearby.  He placed it on a little wooden stool that was next to him, he placed in such a way that he could look down at key words and continue to speaking.

The Elder began, an example of purification that one culture used was a type of lodge, and were the Finnish people.  The lodge is referred today as the sauna.  Like many first peoples, the Finns were nomadic and it was the easiest way for them to clean themselves; however, when we look closer at the use of the true use of their lodge, it had a great deal of spiritual significance.  It was their belief that by participating in their lodge, (sauna) they would have a closer relationship with Creator.

Another indigenous culture, the Islamic people used a lodge they called Hammam, which means spreader of warmth.  The use of their lodge is linked to fertility & spiritual beliefs, which includes the abstinence of using substances.

The Chinese used (zheng qi zao) or sweat baths (han zao) for spiritual or physical cleansing.  Buddhists uses sweat baths as part of their spiritual beliefs, which were used from India to Tibet to Turkestan to Japan and to China; in one form or another; however, they were all with unique spiritual practices associated with the different regions.

In Russia, they used the Bania, in which they used boughs to purify their bodies while in wooden bath structures, and would later go into a cold-water bath as part of their spiritual practices; there were some similarities to the saunas in the structure of their wooden bath houses however, the actual practice was unique to the Russian peoples.

In Japan, they use the mushi-buro, in which the person uses smoke, wood and water to sweat in a steam bath.  Their belief in the sweat bath was so strong that they equate to using hundreds of medicines.

In Mexico, the Mayan used the temescal, which is a sweat house, where many people participated in ceremony together.  After being in the temescal, they too would use cold water as a way to purify after their ceremony.

The Irish, use a kind of sweat bath called allus bothan, where the fire was heated and the people stood within the structure upon stone or sod, later they used cold water as part of their purification.

The Hindu’s Fire Lodge; was a sweat bath that reacted the story of creation.

The Hawaiian Hot Hut, which is similar to the sweat lodge or the sauna, was used in purification ceremony.

The Elder paused and looked around the circle and said in wonder, isn’t this amazing!  The participants were all nodding their heads in agreement.  They also noticed that the Elder rarely referred to his journal as he described each ceremony.  They could clearly see that he was excited by what he had to share.  The Elder continued, my dear ones, I could have provided so many more examples of Indigenous ceremonies around the world; however, the point is that it is clear…

We share common beliefs that have bought us closer to Creator.  We also see that most Indigenous people believed in the sacredness of the elements and the healing properties of natural herbs & medicines.  We all believe that purification ceremonies help us heal, mind, body and soul.

Another common belief for Indigenous peoples was that all of Creation had spirit including the smoke that rises from the natural elements that join us in ceremony.  Many had a name for the sacred smoke, for example, the Fins named it loyly, spirit of life.

In some Aboriginal cultures, we believe the smoke rises up with our prayers. Some Christian’s followers believe that incense or candles that they burn helps them on their spiritual walk, for example, some Christians light a candle as a symbol of prayer.

Again I can provide countless examples, the point is…

Regardless, of how peoples celebrate their relationship to Creator, the spiritual belief that people have is connected to a desire for personal and community well-being.

While some cultures may have discontinued practicing their ancestral ceremonial processes as I described, many original peoples continue to participate in the ceremonies that are as old as time.

I realized this week that we all have a sacred responsibility to consider the ancient ceremonies when we go about deciding who or who doesn’t belong in ceremony.  I think it is important that we understand from a deeper spiritual level that people from all over the world share similarities ceremonial practices.

In this light, it would mean that we all have a natural belonging in ceremony, regardless of where we come from in the world.

In the same light, it makes sense to arrive at a realization that regardless of how we say the word “Creator”, or what language we use to say the same word, the point is that it is the same Creator that we are in relationship with, again, no matter where we come from in the world.

It is also in searching for the similarities that we come to realize that truly; we are all related, and as soon differences diminish; we realize that we are all one race; the human race.

It is in the same spiritual awareness that we realize that under this garment, this physical body, we are all the same, we are all spiritual beings.

[This article, excluding Grandmother Raven’s contribution, was sourced from DJ MACKBOOGALOO (Asatru) & MICHAEL BASTINE’s (Algonquin) FREE E-BOOK written for humanity, called “WE MUST GATHER OUR NATIONS TOGETHER” (Mad Bear and the Red Road of Spiritual Activism), which documents the lost history & present state of Inter-Tribal Unity Consciousness. The indigenous Traditional Elders (medicine people) have messages & prophecies that are disclosed in this E-Book. We are being called to act on their direction to spread the word. Let’s take higher action… Now! Let’s gather our nations together! Let’s unite the tribes!]