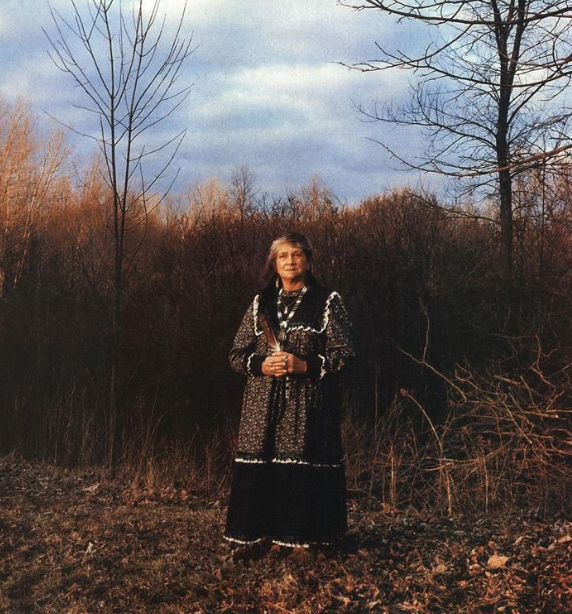 Shut the heavy door and the large, already homey kitchen in the Native Women’s Resource Centre becomes a welcome sanctuary from the grit of downtown Toronto. For the eight women sitting purposefully around a Formica table, an added balm is the person they have come to see—Grandmother Sara Smith, a Mohawk from the Six Nations Reserve near Brantford, Ont., a modest, big-boned elder with a mischievous smile and the kind of soothing voice you’d like to fall asleep to.

Once the dinner dishes are cleared, Grandmother Sara, as she is almost universally known, prepares to conduct what she calls “a circle,” a meditative gathering for sharing and healing spiritual wounds. From her medicine bundle she sets out a woven mat, deer antlers and a shell to hold the tobacco and other “sacred plants” she plans to burn, sending their aromas throughout the room. The discussion, too, flows as freely as the smoke between the symbolic and the everyday. Sara gently connects the dots: a baby’s cry down the hall leads into a homily about the natural intuition that is locked within us all.

Close your eyes and you could be transported back hundreds, maybe thousands, of years to late-night talk around a hearth and the gentle ritual of congregation. But “this is not religion,” says Grandmother Sara. “This is not native religion.” What she is proclaiming in her own quiet manner is spiritual journeying “as a way of life”—a way of being thoughtful today about the generations to come.

Now 62, Grandmother Sara began her own journey in earnest some 30 years ago as her four children were growing up and she felt there was something incomplete about her spiritual life. A stint in tribal politics didn’t fill the gap. Nor, entirely, did regular get-togethers with a group of women to analyze dreams, conscious meditative dreaming being a staple of inner life and decision-making for many natives. But both led inexorably to a re-examination of the old ways and the old legends, to long conversations with elders and visiting tribal leaders. And to the point where Sara is herself now one of those elders—the “Grandmother” is an honorific, though she’s a legit one, too, with 12 grandchildren.

In her day job, Grandmother Sara manages a non-profit gift store on the Six Nations reserve to help individuals with special needs. Her home is a cozy mix of native art and modern technology. An oversized satellite dish stands guard outside; a granddaughter does her homework on a laptop. But art and technology pale beside the signs of an ancient belief: in the backyard, a prayer circle of white pines; next door, a spiritual centre that she and her husband, Roger, had built a year ago, with a great hall and bedrooms for visitors. It is their gift—of a modest haven—to a world they see hungering for belief. And it is a world already beating a path to their door.

In Grandmother Sara’s kitchen, there’s a calendar of commitments that seems to stretch to another lifetime. Her travels have taken her to England, Europe, Australia, Central America and throughout Canada and the United States. A few years ago she was the only Canadian invited to meet with the Dalai Lama at a gathering of indigenous peoples from five continents at a Tibetan monastery in France. It was an event called the Gathering of the Shamans, and while Grandmother Sara feels native beliefs have much in common with Buddhism, she is categorical that she is not a seer or shaman—when pressed she says she is not even sure what the terms mean. She is simply a custodian, someone who keeps the oral traditions alive and links them, when possible, with the events of today. “We are a circular people,” she says, and by that she means many things. One of them: that a kind and thoughtful life can resonate for generations.