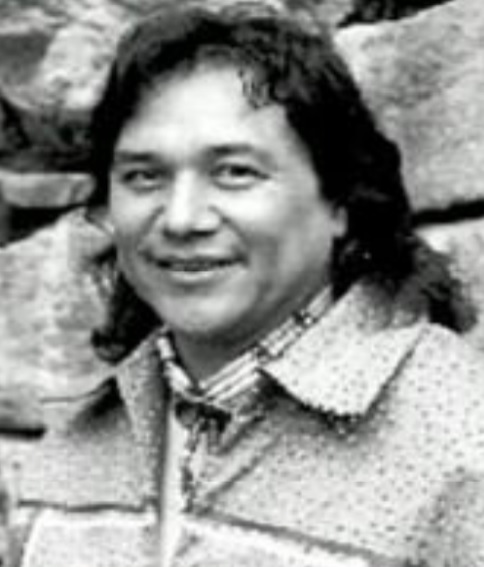 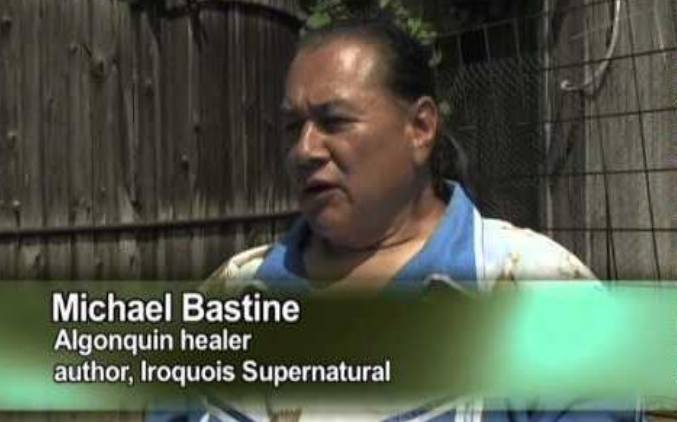 An Algonquin elder, born in 1953.  A teacher, culture-keeper and author.

As a result of his apprenticeship with Mad Bear and his acquaintance with Algonquin, Iroquois, Hopi and Cherokee mentors, along with wisdom-keepers from all over the world, Michael has developed many insights that are of great benefit to the present inter-tribal unity efforts.

For years Michael has been preparing us for the new Earth cycle. He is also coauthor, along with Mason Winfield, of the book, “Iroquois Supernatural”.

A part of Mad Bear’s mission, whether he or Michael planned it or not, was for him to 1st be introduced to Mad Bear.  Then, Michael was to observe how Mad Bear applied the principles that the Great Peacemaker taught.  In the end, Michael was to see the results of how the principles of the Great Peacemaker, applied by Mad Bear, actually worked out.  As a result of this experience, Michael is able to spread these teachings to the 4 corners of the world. 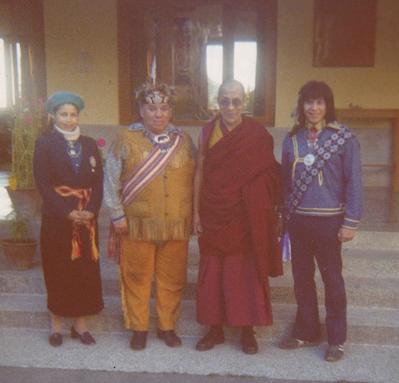 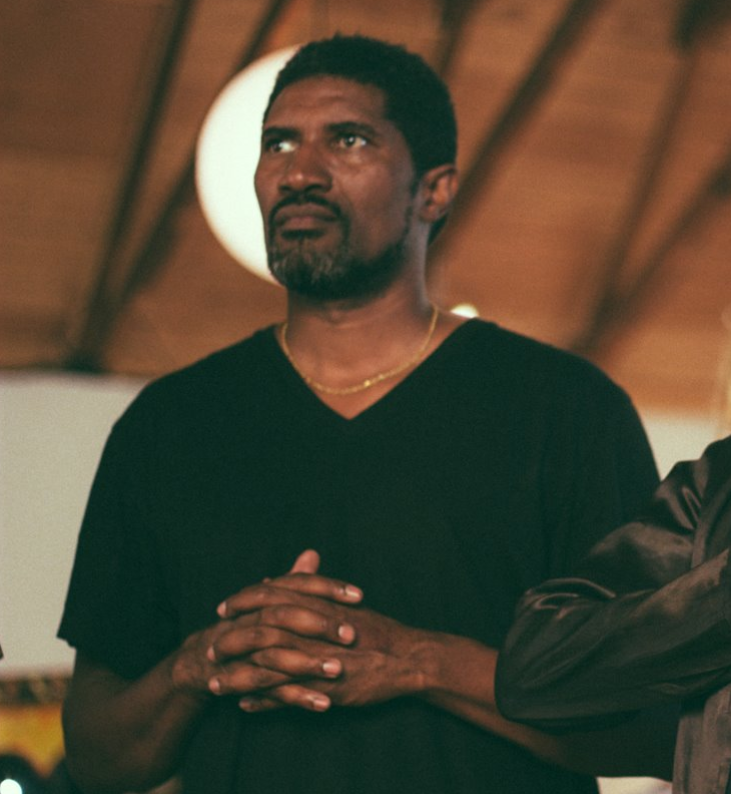 DJ Kwaku is a Detroit-born seasoned veteran DJ/Producer and the first person from the West Coast (Los Angeles) to track down and deejay Chicago House records in 1986.  He helped fuel the flourishing House Music scene in Atlanta (late-90s to early-2000s) by bringing together multi-cultural ravers with African-American House Music enthusiasts.

“First person from the West Coast (Los Angeles) to track down and deejay Chicago House records in 1986.” -CYGM 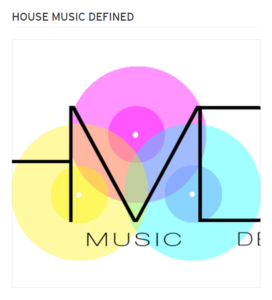 DJ Kwaku is a descendant of ancestors John & Jane Walls who founded the northern terminal of the Underground Railroad (Ontario).  He feels that it is his destiny to empower people, just as his ancestors lent a helping hand to empower people in their days.

Kwaku’s uncle, Robert Walker, was a music business contractor who, like the “Black Godfather” Clarence Avant, was the power behind the scenes… a fix-it-man… the go-to guy… for music influencers like Barry Gordy and Don Cornelius.  It was his suggestion that prompted Motown and Soul Train to move West.  In fact, Kwaku’s immediate family and friends were a part of that transition from Detroit to Los Angeles (San Fernando Valley) when Kwaku was 4 years old.

Robert Walker also had other notable accomplishments.  For example… he helped Barry White get out of a bad record deal and worked with Hugh Hefner to set up the historical Jazz music night at the Playboy Mansion in Chicago, which helped break the color barrier at the time.  Robert was a major mentoring figure for Kwaku at a young age who taught him the principles of “empowerment”.

“Kwaku’s uncle, Robert Walker, was a music business contractor who, like the “Black Godfather” Clarence Avant, was the power behind the scenes.” -CYGM

Thus…. Kwaku has co-founded Wehave1 and the Wehave1 Foundation (Multimedia, Music, Film, Print, and Live Events) designed to activate, support and empower the communities of the future.  He is also a supporter of inter-tribal unity youth-mentoring outreach (CYGM).

END_OF_DOCUMENT_TOKEN_TO_BE_REPLACED 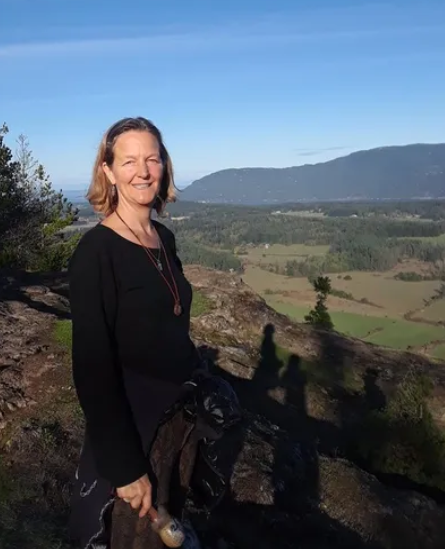 As a Writer, Producer, Educator, Sound Healer, Catalyst, and Entrepreneur, it is my Mission to Help Humanity and The Earth Make it Through The Shift, in as Gentle and Easy Way as Possible.

My work with individuals, groups, and organizations, activates people to step more fully into their purpose and gifts.  I facilitate major shifts in consciousness, by helping people learn to live more fully in the harmonious frequencies of their divine nature. 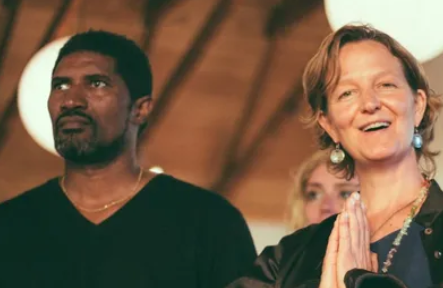 Co-Founder of Wehave1 and Wehave1 Foundation  – Multimedia, Music, Film, Print, and Live Events designed to activate and support the communities of the future.  We also offer 1 on 1 Leadership Counseling and Consulting.

For the past 10 Years, independently, and now in partnership with Clifford Burtley and WH1, I have worked with hundreds of leaders to help bring their business, groups, and organizations to the next levels.

I help restructure and reorganize foundations, so that more energy can be freed to generate and flow funds, increase input/output flow, and to smooth and streamline operations.  Once flow is freed up, I then work to unify, harmonize and network efforts with others doing similar work. 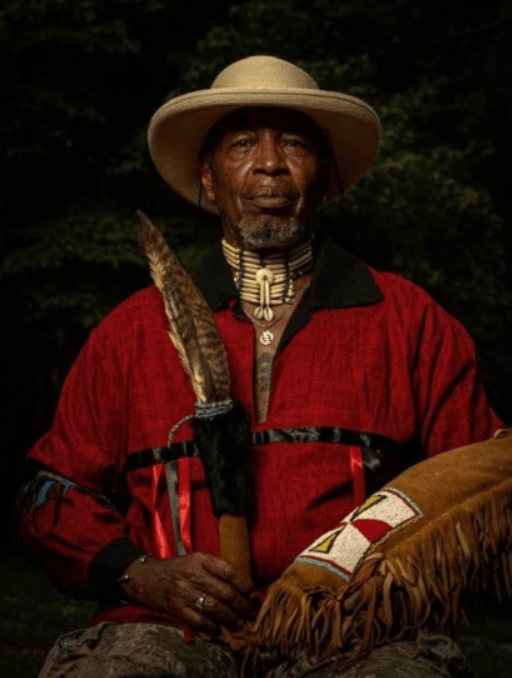 A researcher of African History, Indigenous American Culture and Spirituality and the founder of A.T.U.M. (Awakening True Universal Minds), an organization committed to the research and dissemination of cultural, historical and spiritual wisdom of the original people worldwide. Kwame SunHorse is a member of The Committee for The African Holocaust Memorial at the Kemetic Institute and a member of the Council of Elders for The Healing Lodge of the Children of Two Shields. As a student at Malcolm X College, he majored in Black Psychology where his passion and innate gifts were further cultivated, leading him out of the university learning environment and into national libraries and the lectures of world-renowned scholars. He has Facilitated traditional Rites of Passage programs in the Akan Fante tradition both nationally and internationally. With over twenty-five years of experience in the field, Kwame SunHorse has served as a national consultant on best practices and human rights in SuperMax prisons and has presented and written extensively on the subject “From Slavery to Private Prisons”.

END_OF_DOCUMENT_TOKEN_TO_BE_REPLACED 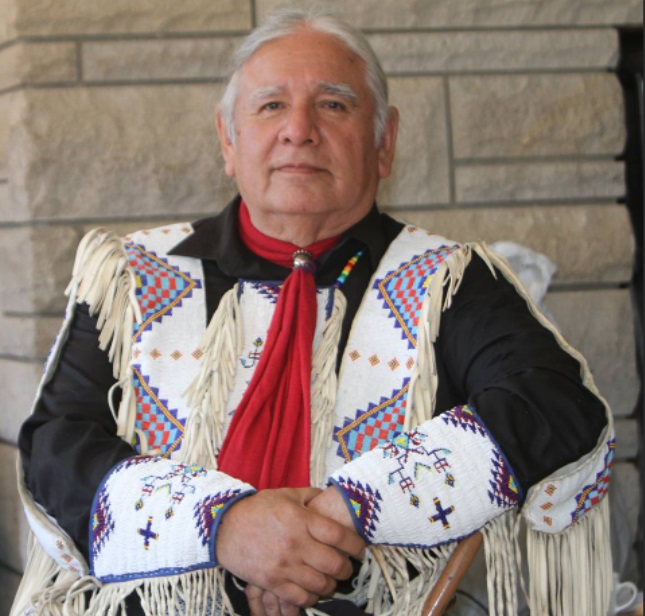 (Founder of the Star Knowledge Conferences)

“The Eagle Nations said that I would be known as Wambdi Zizi (The Golden Eagle) in the future.”

Standing Elk is a member of the Ihunktowan Dakota Nation.

His blood line is Lakota, Dakota, Nakota and French.

He is one of seven Sundance Chiefs for the Yankton Sioux Sungdeska Sapa Tiospaye. 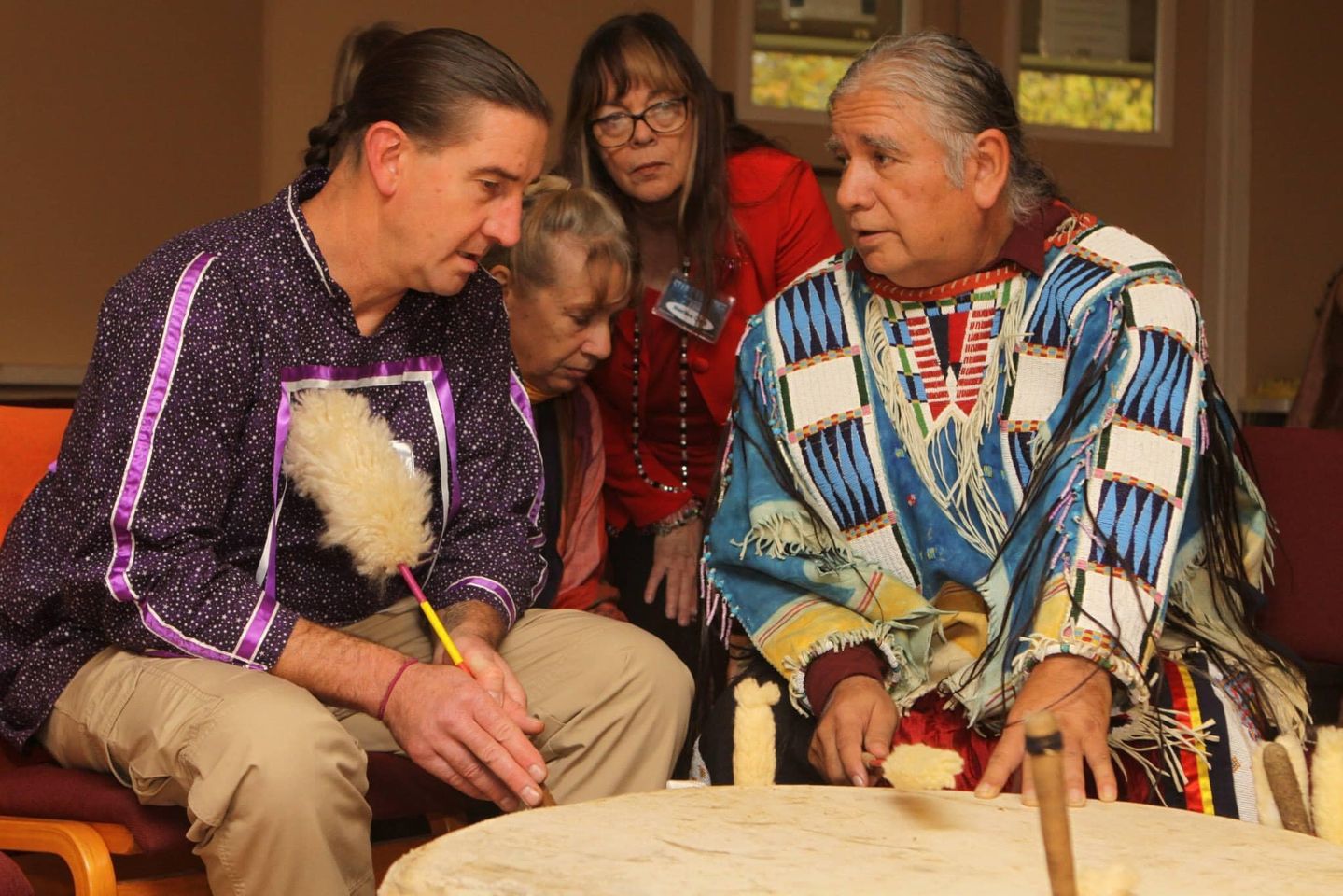 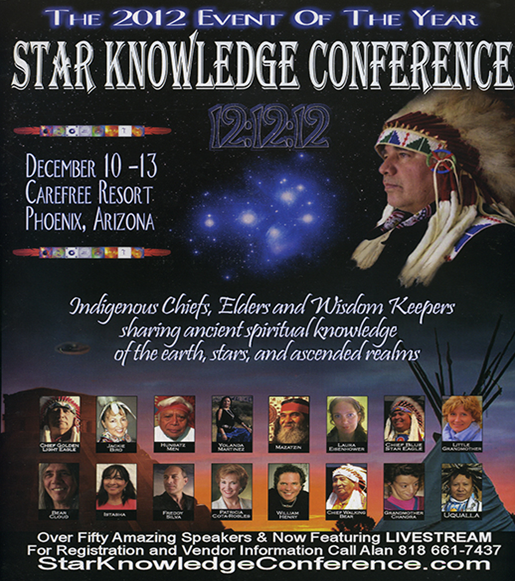 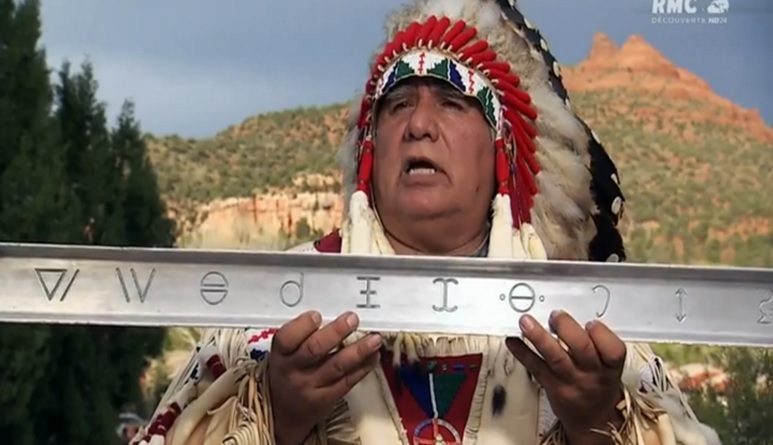 The Lakota/Dakota Medicine Men are now being instructed to share the spiritual knowledge of the Star Nations because of the contamination of Mother Earth and the pollution of the air.” -Chief Golden Light Eagle (Dakota)

1996 was the official year that Native Americans came together to disclose their contact with E.T./Star Nations.  They have kept this a secret for a very long time.  The disclosure was triggered by the 1994 birth of a female white buffalo calf, named “Miracle”, in Janesville, Wisconsin.

Floyd Hand, a Lakota Medicine Man, commented on the birth of Miracle, “For us the Indians, it is like the return of Christ for the white people.”  The Lakota-Dakota-Nakota Nation (Sioux) had received centuries ago the Sacred Peace Pipe (Chanunpa) from a spiritual female being called “White Buffalo Calf Woman” along with high spiritual teachings.

Little Elders will come in the children now being born, who will suddenly talk early.  The birth of the White Buffalo female calf is the sign of the return of the Buffalo nations from the Stars.” -Woableza (Dakota)

“Part of White Buffalo Woman’s prophecy was to divide time into 7 fires or ages.   She promised to return during the last fire, and bring with her a new & final chance for reason.  During the 7th fire a new Red Nation can be formed, red being the union of red, white, black and yellow.  We will be able to retrace our steps and examine what we have done wrong.  We are not preserving what has been given to us to care for.  We are polluting the Earth.  We have become our own enemy.  During the 7th, the light-skinned man will be given a choice between his technologies & his nature.  If he chooses his nature, there is still a chance for harmony in this world.  If he make the wrong choice, he will bring on the destruction of all of us.”

Prophecies were being given to the Native nations about the coming of the “Buffalo Nation” which first would be the merging of the Red race in unity and harmony with the White, Black and Yellow races.  The Buffalo Nation would also mean the coming of the Star Nations, the civilizations from the Stars.  One of the prophecies says that these times will be announced by the birth of a female white buffalo calf, which will change color to yellow, red and black.  This is exactly what happened to “Miracle” the white buffalo calf. Then to pinpoint the prophecies, a few other white buffalo female calves started to be born, even on Indian reservations.

Arvol Looking Horse, the 19th-Generation Keeper of the Sacred White Buffalo Calf Pipe for the Sioux Nation, seeing that the prophecies from many Native nations were being fulfilled, called for a “World Peace & Prayer Day” on June 21, 1996.  Spirituals leaders & elders, other Sacred Bundle Keepers and many others gathered at Grey Horn Butte.  This was also a joint effort of Native Elders and spiritual white people for the first time.  Until then, the elder councils of the various tribes from North America were always forbidding their members & medicine men to share their knowledge of sacred spiritual matters, and records pertaining to centuries of Star Nation contact, with the white man.

The Star beings will return at the time of Earth Changes.  The first signs are floods, fires and earthquakes.  White Buffalo Calf Woman is coming back to Turtle Island.  Each of us can bring the Star Beings in, but only with purity of heart & intention.” -Looks-For-Buffalo (Oglala)

Sun Bear (Ojibwe) was the first Native American teacher to reveal on a large scale Indian spirituality.  Now, from 1996 onwards, the elders started not only to bring the spiritual Native ways to the world, sharing sacred ceremonies with white people, but would reveal their contacts with the Star Nations which were kept secret, up to this time, within sweat lodges & elders councils.  The appearance of full circular rainbows around the sun above ceremonies, called “Sun Dog”, would be another sign that the prophecies were about to come to completion.  As of today many Native elders are saying that the passage between the 4th World and the 5th World of the Native Americans is occurring right now.

In the winter of 1995, during a four day praying fast, aka Vision Quest (Hanblecheyapi), Standing Elk (Chief Golden Light Eagle), a Ihanktowan Dakota Spiritual Advisor & Sundance Chief, was instructed in a vision to organize the first “Star Knowledge Conference” on the Yankton Sioux Reservation in South Dakota.  The vision showed that Native American spiritual knowledge about the Star Nations (extraterrestrials) was to be shared with the world.  This first conference also fulfilled ancient Hopi & Lakota prophecies.

During the 1st Star Knowledge Conference, in June 1996, on the Yankton Sioux Reservation, and the many other conferences that followed, various spiritual shamans & elders from many tribes have spoken.  Such as:

An Iroquois oral tradition told of an E.T. telepathic message, ‘We are coming!’   The Iroquois Elders responded, ‘Don’t come, we are not prepared.’  The Star Beings replied, ‘Prepare yourselves’” -Paula Underwood (Oneida)

There are sacred ritual altars in native Sacred Sites, where knowledge from Star beings is kept & honored.  These Star Nations altars send a blue laser light to the heavens which the Star Nations see as beacons.  UFOs used to fly over Bear Butte, the sacred heart of the Black Hills.” -Holy Bull (Lakota)

My people await Pahana, the lost White Brother from the stars, as do all our brothers in the land.  He will not be like the white men we know now, who are cruel & greedy.  We were told of their coming long ago, but still we wait for Pahana.” -White Feather (Hopi)

We are all brothers & sisters in the beginning and we will all come back together in the end.  There is hope that we can eliminate harsh disasters that are about to take place.  We have to remember that the Hopi Prophecy tells also about 3 migrations with the Star Nations back to the stars and that only people awakened in spirit and in the heart will make it.” -Grandfather Martin (Hopi)